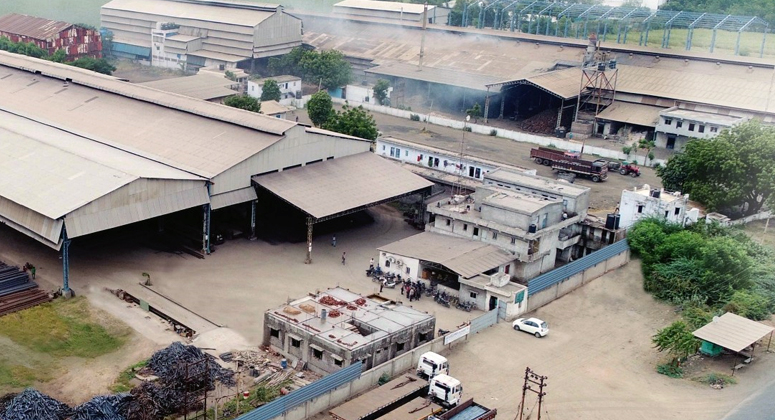 Initially the promoters Mr. Vithalbhai & Mr. Karsanbhai (Family friends since four decades belong to one town called Gadhada-Swaminarayan, Nr. Bhavnagar) decided to establish the trading firm of agricultural seeds & pesticides in Gadhada town itself, thereafter in 1995 to reap the benefit of inherent locational advantage of Bhavnagar city and allied area which is very well known for Alang ship breaking yard (which assures ample supply of steel scrap and plates). The Krishna Group established its first rolling mill in 1995 in the name of Navbharat Steel Re-Rolling Mill for manufacturing of TMT Bars. In 1995 there were around 100 mills carrying the same business but as the time pass various mills closed their business which were unable to meet competition in the market and to be specific there remain only 30 mills in 2001. Thereafter in 2001 they takeover "Priyank Steel" a structure mill and changed its name to "KRUSHNA STEEL INDUSTRIES" to enter into the manufacturing line of structural steel (Angles, Round, Flat, Channels) as partnership firm having following partners:

Promoters have vast experience in the same line of industry and have seen each phase & cycle of the rolling mill / rerolling mill industry and further to cope up with the growing need of Transmission Line Industries and to expand the manufacturing capacity of plant, has laid the foundation of setting up Automatic Rolling Plant in 2009 named "KRISHNA STEEL PRODUCT" for manufacturing Transmission Line Angles. The Firm has annual capacity of 80000 MT/Annum at village Ghanghali (2.5Km away from KSI). The partnership firm is incorporated on 01.08.2009 and below are the young (second generation of Mr. Vithalbhai & Mr. Karsanbhai) promoters of the newly formed firm KSP:


"The name of our Partnership firm KRISHNA STEEL PRODUCT has been changed to KRISHNA GLOBAL TRANSENERGY LIMITED, a Public Limited Company with effect from 01st August, 2019."